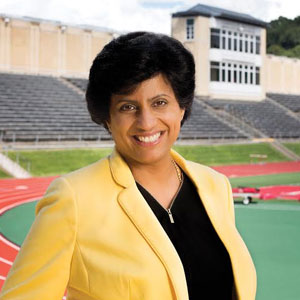 Priya Narasimhan, Founder & CEO It was love at first sight, as Priya Narasimhan found herself seated at the Mellon Arena for a hockey playoff match. “Let’s Go Pens,”—the crowd erupted in unison to the flight of the hockey puck going past the goaltender, and Priya knew at the moment, that her first live hockey game would not be the last. Her zeal for the game soared sky-high in the ensuing months, before it was time she gave something back to the sporting community. “We started the journey to essentially build a way for fans to take control of their experience,” implies the President and CEO of YinzCam. Being a faculty at the Carnegie Mellon University, it was the clout in technology—Priya's cup of tea—and a vehemence for hockey, that formed the groundwork for YinzCam which flagged off in 2009, as a spin-off venture out of the university. Today, the company has knocked the ball out of the park, by working with the who’s who of the sports town, efficaciously covering the grounds from NFL to NBA, NCAA to NHL, NRL and more.

“As a fan, I have always found myself in situations like somebody tall standing in front of me, cutting the view off at the right moment,” points out Priya. “At YinzCam, what we sought to accomplish is to empower the fan to be his ‘own broadcaster’ of the game.” The company has pragmatically chosen three key entities—venues, teams, and league committees—that when given the ‘technology nudge’ can excel in rendering an unrivalled sport experience to fans. By equipping these channels with the power of mobility to ace in times of instant gratification, YinzCam has leveled the playing field for spectators, including fans who watch matches from home and poor visibility locations.

“Giant displays in stadiums that broadcast live streaming, replays, and statistics have been around for a long time now,” states Priya. Breaking the mold, YinzCam has developed its own customizable version of the Internet Protocol Television (IPTV) that can be setup inside shopping malls, hospitality centers, and more particularly, stadiums. “Fans can now walk into a stadium, get their booked seats—be it the club area or the bleachers—and the TV or the digital signage responds to them,” she adds. The display recognizes the fan and greets him, “Hello John Doe, welcome back to your fifth game this season.” By helping venues with the creation of a personalized ambience, YinzCam motivates the guest to feel a part of his fan faction and revisit the stadium often.
What’s more, a remote control widget pops up on his mobile device, with which he can increase or decrease the volume, turn it off, and share and play content from his mobile on the display. Demonstrating unprecedented two-way correspondence, Priya says that the IPTV solution enables the walls of the stadiums to respond to the fan.

Having discovered the perfect teeing ground on mobility, YinzCam ventured further into the technology, leading the company to uncover the potential that smartphone apps held in generating ROI for sport venue owners. “Our mantra while designing these smartphone apps involves a concoction of content, convenience, and customization,” postulates Priya. Of which, content is the most significant and fundamental component that has the vested responsibility to engage a fan by delivering live video and other material, such as pre-match and post-match interviews, statistics, and graphics.

Once the core component—content— is in place, the need gravitates toward relaying it at the convenient disposal of the end-user. “There is something absolutely exhilarating about experiencing a game live,” she beams. “However, watching a live match at the stadium accompanies the hassles of finding transit and waiting in queues to book tickets, dissuading fans from going to sports arenas,” explains Priya. YinzCam’s solutions have conquered the high-end of convenience by allowing its users to manage directions to the venue, select and book tickets, and order food from their Android, iOS, and Windows devices.

"At YinzCam, what we sought to accomplish is to empower the fan to be his ‘own broadcaster’ of the game"

Finally, to impart personalized experiences to fans, YinzCam has invested its product development resources in behavioral analytics, business intelligence engines, and powerful contextual algorithms that deliver content based on observed preferences. “Imagine your smartphone app responding to you in diverse ways, such as identifying your companion for the evening, and remembering food preferences,” elucidates Priya. “That is exactly what our apps do. For instance, when I’m out with my ten year-old son for a match, our intelligent algorithm suggests that his favorite pizza kiosk is nearby.”

YinzCam’s smartphone apps are not only designed for venues, but are tailored for teams and leagues and collectively, they have crossed the 30 million installations mark till date. Teams and League committees can pull more viewership numbers by offering discounts and loyalty rewards for fans and YinzCam arms them with the technology to drill deeper insights.

Our mantra while designing these smartphone apps involves a concoction of content, convenience, and customization

“For instance, after attending four playoff matches in a row, teams can reward fans with concessions off food checks on their fifth match and can also give them a shout-out from their official twitter handle,” illustrates Priya. Unifying such varied elements that elevate customer experience onto a single holistic platform is what YinzCam does best and word on the street has grossed the company a prominent clientele in the sport industry.

The Game Plan for Success

To veer its vision and action light years ahead of its competitors, YinzCam believes in building algorithms ground-up and not just the infrastructure. This approach has helped the company to automate every part and parcel of a sport event workflow, inclusive of the diagnosis procedures, that is redefining the quality of spectatorship experience with optimized levels of fault tolerance in the high-density sport environment. The flexibility and scalability of the cloud-based computational capacity and bandwidth add to the effectiveness of a completely automated venue.

The fact that the company has sustained without investments from venture capitals in a high density industry pronounces Priya’s pin-pointed focus on a solution portfolio that re-aligns the product tree, if and only when a client requisites. “We are constantly pushing the bounds of creative autonomy with no fear of failure,” quotes Priya. This is where, her experience as an academician comes in quite handy, where she regularly conducts crowd-sourcing sessions with top talent and her clients, to put creative ideas into fruition.

Being early in the game has no doubt fuelled YinzCam’s sprint in the sports technology industry. Being a fan herself, it is safe to assume that no one knows better than Priya, when it comes to delivering the ultimate sport spectator experience.

Down the lane, customers of YinzCam and their fans can expect augmented reality to make its entry into their smartphone sports apps. There will come a time, when fans may not even leave the confines of their homes, but still catch all the action and experience their favorite teams play as if they were present in the stadium. 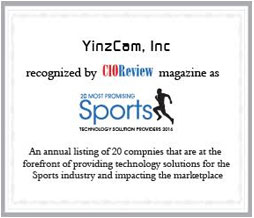 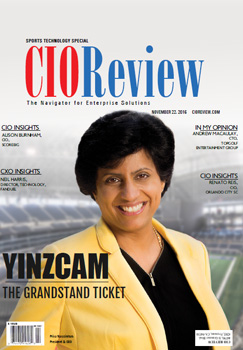