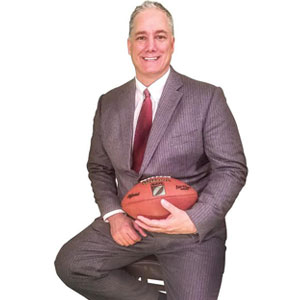 Robert Licopoli, Founder & CEO 360 Sports, Inc. is changing the landscape of sports as we know it. Quickly evolving into a sports business giant with athlete development at its core

Be it Abby Wambach’s hat-tricks, Dan Carter’s precision, or Dustin Johnson’s winning shots, there is always a debatable question on the table: Is it just a special DNA sequence and sheer talent that drives these athletes to success?

For Robert Licopoli, a stereotypical jock, the answer to this question was revealed several years ago during a tough day of golfing with his father-in-law. “I wasn’t trying to let my father-in-law win. He was doing it on his own!,” Licopoli jokes. Out of frustration and determination Licopoli asked his golf partner to film his swing to see where he was going wrong. It was this video that uncovered the undeniable truth, “I didn’t realize how bad my technique was,” states Licopoli, “In just a few moments, I was able to correct my swing by pulling up a video of Phil Mickelson, a fellow lefty with the same height and body type, and compare my swing to his. In less than 5 minutes, I was able to mimic his swing.”

Not realizing how much the extent of improper technique was impairing his performance, and probably the performance of so many other athletes, led him to create something that’s never seen before in the world of sports: an athlete development eco-system. 360 Sports, Inc. was formed in 2015 by rolling up a loosely organized events company and an agency, forming what is now an organization that includes vertically integrated product and service business units designed to simplify athlete training and development.

Having served as the founder and president of a national amateur football league, building a sports management company was a natural progression to Licopoli’s passion to make athlete development feasible. “There were more than 5,000 players in our football league. Of the amateur football players who were striving to turn pro, many were bigger, stronger, and faster than their counterparts in the NFL. We would get them into NFL team camps but they wouldn’t last more than a week. The consistent feedback was that the athletes were missing proper technique,” says Licopoli, Founder and CEO, 360 Sports, Inc. The company strives to make proper technique training feasible as much as possible. In order to do this, 360 created a revenue model that offsets the cost of athlete development within a parent company consisting of several subsidiaries and verticals.

In addition to technique training, 360 Sports’ modus operandi involves facilitating all aspects of athlete development including education, character, and career. According to Licopoli, raw talent needs to be built upon a foundation of good character first. “There are challenges,” he admits, “We found that unqualified coaches and the prohibitive cost of individualized training are two primary barriers that keep potentially qualified athletes from competing at a higher level. In our eyes, the coaches were not teaching or were teaching improperly. This wasn’t fair to kids.”

To deliver services to tens of millions of athletes, the experts at NY-based 360 Sports, Inc. designed a mobile platform that offers free mentoring, marketing, and analytics for athlete members. Active professional and retired athletes can offer their coaching advice, as well as earn passive income from the sales made in connection to the freemium mobile app, a potential source of additional revenue.

360 Sports. Inc, is disrupting the business of sports by gamifying athlete development. Kids will want to go outside and play again

By connecting active and retired sports professionals with young and amateur athletes, the sports-tech platform offers almost any resource the athlete needs. It’s like having a coach in your pocket.

While the draw for many young and amateur athletes is to engage with active and retired pro athletes, 360 expects athletes to use the app year after year by “gamifying” the measurement of their performance. Specifically, any athlete of any age can enter their metrics and pump out an objective comparison to that of all active pro athletes in their respective sport.

Originally designed to allow athletes to perform video analysis, create free marketing profiles and keep a diary of their training, the 360 Sports platform has grown to incorporate biometrics and game statistical analysis, where athletes can measure their performance and compare themselves to pros. With an out-of-the-box sports marketing approach, it also allows athletes to create a digital presence that coaches can use as one more tool to evaluate athlete performance as well.

Leveraging their extensive experience in event management, sponsorship sales, and league management, 360 Sports compacted these profit centers into the app. The company’s event platform assists mentors to plan and market their own camps and clinics for a better-quality experience. The app allows 360 Sports, Inc. to be all inclusive so members never leave the platform to access other areas of the business.

In the vicinity of progress as well as challenges, 360 Sports’ focal point continues to revolve around their primary aim: removing the barrier to athlete development by making proper coaching free. Even when athletes enroll in lucrative training programs, Licopoli says, “systemically, coaching seems to come up short when it comes to teaching kids and amateur athletes proper technique training.” To that end, “the company’s user-friendly platform is centered around mentoring, marketing and analytics,” says Licopoli. He continues, “we never expected the results of the individualized learning experience to be as quick as they were. However, when you break down the athlete training process, it doesn’t take long to learn technique but it does take regular practice to maintain it.”

Being able to watch yourself on video in comparison to the pro, makes it a faster learning experience. Evidently, Licopoli’s 10-year-old son nearly perfected the proper NFL quarterback technique by using the platform. “I wasn’t actually trying to teach my son technique when we first created the technology; however, in a few hours on a dreary Saturday morning, he was able to mimic the drop-back footwork and arm mechanics of Drew Brees, one of the all-time great quarterbacks in the NFL. That’s when we knew we were on to something,” beams Licopoli. “Athletes, regardless of their age group, deserve the same opportunity to learn proper techniques and we can do this by removing the cost as a barrier to learning,” says Licopoli. It is this aspect that Licopoli and his team all believe in.

The idea is a simple one, as athletes realize results, their self-confidence will improve and may extend their interest in sports. It also creates fan loyalty driving sales of products.
Topping it all, is the company’s inclusion of retired professional athletes by offering them opportunities to mentor athletes who are at earlier stages of their development. “We also offer in app purchases for sports related products and services such as apparel, sports camps, travel and even insurance. The affiliate-like model integrates the products and services of our verticals so that pro athletes can supplement their income with each in-app purchase made by one of the many athletes they mentor. No one has done this before and several pro leagues have already caught on. They see this as an opportunity and have been supportive of it to engage the retired pros,” says Licopoli.

In addition to this, “As 360 sports evolved, we learned to master all aspects of sports business. We are able to provide what athletes really need including insurance, real estate investments, wealth management, apparel and more,” mentions Licopoli. Today, the decade-old idea is breaking the norm with its comprehensive offerings of sports products and services to athletes at all stages of development and sports related organizations resulting in an effective value proposition in the realm of sports.

360 Sports’ prowess goes beyond just the power of their technology. The team’s effort to reduce the expense on stadium rentals is spearheaded by its real estate development experience, which they believe will help them build and manage 200 multi-sports complexes across the country. These multi-sports complexes are structured to host 60,000 teams in 10,000 locally operated sports leagues for more than 1.2 million athletes in all age groups within each sports community. The potentially powerful plan for the facilities anticipate substantial growth in annual revenue that will be comprised of membership fees, sports apparel, sports-tech, advertising, real estate, finance, insurance, sports events, entertainment, and travel. “Space for practice and competition is limited all over the country and when available it’s at a premium price. Even then, you aren’t guaranteed to get a field. As a result, we found that it is more feasible to build our own sports complexes to host our leagues and events than it is to compete for limited space that also comes with the high risk of infeasibility. We feel the time is right now for a company like 360 Sports,” explains the CEO.

Amid the numerous accolades and accomplishments in its flourishing journey, the one that shines the most is 360 Sports, Inc.’s entry into the list of public U.S. companies. With this, the company achieved the milestone of becoming one of the few early stage companies to qualify with the Securities and Exchange Commission as a Regulation A, Tier 1 company under the JOBS Act. “The decision to go public”, as Licopoli said, “was focused on quickly scaling our growth to speed up the process of providing equal access to training and opportunities for development for athletes at all levels.” The team at 360 Sports learned there were patterns for building businesses that both successful and non-successful companies seemed to follow, and the team has based their strategy on the lessons these companies offered. “There is no one formula for success; however, there is a repeat pattern for failure. The results so far have been positive since we are only one of five percent of Reg A Tier 1 companies who are still in business more than 12 months after qualifying with the SEC,” states Licopoli.

It is true that 360 Sports is in a sweet spot for now, where the sports related startups and acquisitions market is hot and promises a consistent growth path for the next several years. In the current thick of enhancing athletic performance, mired in prohibitive costs and lack of proper training, an agent of compelling change is 360 Sports, Inc. as it strives to be the leader in athlete development and promises disruption in the world of sports business. 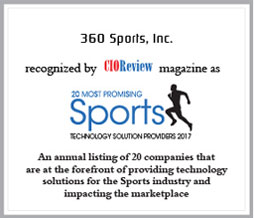