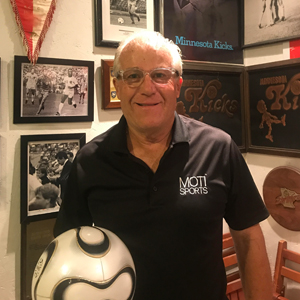 Alan Merrick Director of Sales
Virtual Reality’s (VR) game changing experiences is making inroads in education and training as it provides the ability to create “application based learning” and the learning occurs in a safe, “virtually” limitless environment. VR’s transformation is profound in the sports arena in enabling immersive experiences and MOTI Sports is taking it a step forward into sports coaching and training. MOTI Sports embarked on the development of a system that is three-dimensional, gender-specific and interactive, encapsulating visual learning in a mobile environment. “Our Soccer Training Platform includes engaging gender specific 3D motion capture of player skills and gender specific 3D player and team activity simulations set into a sequential learning curriculum or practice plans,” says Gordy Thomas, CEO, MOTI Sports. The system greatly supports and enhances the coach’s ability to teach and maximizes the player’s ability to learn the sport visually. “In other words, MOTI Sports is helping people learn to play the game from the neck up,” explains Thomas.

MOTI Sports’ simulation tool demonstrates the correct execution of a technique or drill from a perspective of the viewer’s choice. For example, if the game is soccer and the skill is execution of the reverse V “shield the ball” move, MOTI Sports’ platform gives the player the ability to choose the view that best helps them learn the skills–whether from the front perspective, the back, underneath the player to see the footwork, or from behind–the player can choose any of the 360 degree views to understand how the skill is being executed. In addition, they can slow down the execution and view it frame by frame to see specific body movement to execute the move correctly.

The ability to introduce training that is visually interactive and instructive before players begin the actual physical training on the field prepares the player for expectations, correct form, and learning of the skill at their own pace and necessary detail.
“Each player comes to practice with a template of the skill already formed in his or her mind–ready to execute,” explains Thomas. By having players armed with a mental vision of the technical skills, the actual time spent in physical mastery is decreased on the field. The strategy of playing the game can be explored in greater detail resulting in stronger players for the team. One example of the MOTI Soccer Training Platform in operation comes from a coach who used it for a university soccer squad. The platform provided a visual “practice” of strategies on the field that the team wanted to use and it allowed them to see the strategies before they were used in a game. “The focus of the coaching activity was more strategic– here's what we want you to do and here's why,” says Thomas.

In addition to providing a more robust training experience, MOTI Sports’ platform also provides coaches with management tools including a dashboard for setting up the teams, team pages and logos, messaging and announcements, usage analytics, and pre-built, age specific practice plans. In future releases, the player will have the option of a “follow view” as well as a player view of the activity to visualize directly from the player's perspective in a 3D scenario.

MOTI Sports’ mission is to help soccer coaches, soccer players and soccer clubs have stronger player development, and lower turnover of players and coaches. “We've been fortunate to have technologists and content experts at the top of their game contributing to this development effort and we want to make it innovative and unique and master the training segment,” he concludes.